It all started with the visit by an official of the US Consulate General, Lagos,  Mr Russell Brooks to Lekan Salami Stadium Complex Adamasingba, Ibadan, sometime in 2018 to see for himself if truly we play baseball in Ibadan, LL District 01, South West, Nigeria. He met with the District Administrator, Kehinde Laniyan, some Coaches and other officials representing some of the chartered leagues. The General Manager of Sports Council who provided office accommodation for the District in the Stadium was introduced to Brooks as well. Two teams from the city of Ibadan played demonstration game. At the end of the demonstration, Brooks addressed players, informing them he is convinced that the children need the support of the Consulate to ensure they play well and participate actively in Little League programme.

That support came in April 2019 with the funding of the sixth edition of the district tournament attended by 12 teams from different leagues in Nigeria. Below are the list of teams that participated:

Excellers and Acumen presented two teams for the tournament that held in 3 divisions: Little League Major Division, Senior Softball and Senior Baseball. The high point of the tournament was in the Little League Baseball Major Division where Excellers LL emerged the champion. The competition was from April 12 to 17, 2019 and Mr Russell Brooks was around to give awards, certificates and trophies to winners. It was five days of non stop action by excited children.

Two Little League Coaches came from the US to watch the tournament and facilitate a Coaching clinic for two days after the tournament. They were Coaches Raymond Thomas and Gerard Hall. April 2016 was the 6th time Coach Hall would be visiting Nigeria to develop Little League program while that was the second time of the visit of Coach Raymond to Nigeria from the US.

(Picture below shows Coach Gerard Hall clearing some points with local Coaches and Umpires during the April 2019 tournament in Ibadan.)

The intervention of the US Consulate General, Lagos in partnering with Little League Nigeria was a landmark development and contributed to pushing the programme forward in a country where local support is minimal.

The desire of the Consulate was that this would give the local organisation the foundation to pull in more sponsorships from enterprises and government agencies. It is important to mention that predictably complementary supports to this tournament were eventually provided by a Federal sports agency in the South West Nigeria and the Oyo State Sports Council, Ibadan. We are hoping that this relationship will go a long way in sustaining Little League in Nigeria if well mentained. The DA said that is uppermost in his mind and admitted that it obviously requires hardwork on the part of Coaches and officials.

The Consulate financial intervention was in areas of providing local logistics, uniforms for all teams, local transport, flight tickets for visiting Clinicians from the US and meals for over 200 players and team officials that attended the event. The Consulate also assisted in pulling the Nigerian media to give heavy publicity. For more than one month after, media attention was focussed on Little League programmes.

(Picture below shows Coach Raymond Thomas, Coach Gerard Hall and the DA for Little League Nigeria during 2017 edition of District Camp in Ibadan) 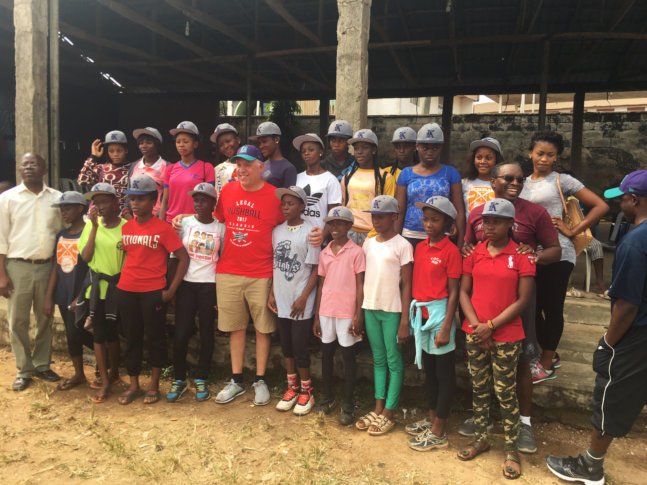 Long time Baseball Coaches, Gerard Hall and Raymond Thomas have proven overtime that  that the most important element of youth baseball is teaching kids “how” to succeed. The Little League concept is designed for kids within age range 4 – 16 years to thoroughly learn, and execute the rudiments of the game (baseball/softball) preparing them for the future.

The Little League Baseball and Softball District 01 Nigeria on Friday says it has concluded arrangement to hold tournament, coaching clinic and camp for players and coaches from April 12 to 19, 2019 and with the support of the US Consulate General, Lagos.

Laniyan said that the programme, which had the theme “Little League Says No to Drugs”, would include educational, health and leadership talk for participants.

Earlier, media reports had indicated that Little League International is a non-profit organisation based in the U.S, which organises local youth baseball and softball leagues throughout the U.S. and the rest of the world.

“We are prepared for this year tournament, coaching clinic and camp for our players; this year’s programme is fully pack with a lot of activities for the various participants.

“Coach Gerard Hall and Raymond Thomas from the U. S will be on ground as facilitators throughout the event.

“Accommodation and feeding will be free for all participants, while teams will be given awards, trophies and sets of uniforms for participating,” he said.

The administrator added that 12 teams from Lagos, Oyo, Ekiti, Kwara, Ondo, Lagos and Abuja would participate in 4 divisions of Little League Major and Senior.

He commended the United States Consulate General in Lagos for supporting and sponsoring the programme and other little league activities in Nigeria.

“We are grateful to the U. S. Consulate for their huge support toward this upcoming programme,” he said.